This mod adds a plethora of random text messages and phone calls from NPCs to make your Sims' relationships with others feel more alive. You can expect phone calls from your Sims' parents, friends, and lovers as well as an assortment of strangers. Some of them are funny, others are wholesome, and some are just designed to torment your Sims (just like phone calls in real life!). The traits your Townies have will also affect what kind of phone calls you will receive and what Sims will want to talk about. The traits your active Sims have will also affect how they react to these calls; Outgoing and Cheerful Sims will love hearing from their friends, but don't expect a Loner Sim to ever really be enthused about an unsolicited phone call, and your Unflirty Sims might not be keen on a sappy late night text from their SO.

This mod was made with help from my Patrons, who received early access to the mod and provided feedback during the development process.

There are many different types of text messages and phone calls you can expect to get during normal play. The ones available to you depend on who your Sim knows, who they're friends with, and who is around in the world. Here are a few samples:

Not every Sim will react to these calls in the same way. How they feel about the call will depend on their personality traits, too. Loner Sims are unlikely to ever be enthused about receiving an unsolicited phone call, and they might become Angry after a barrage of texts from a Self-Absorbed Sim, but Outgoing Sims will reap the benefits of constant social interaction. Squeamish Sims might have a more severe reaction to hearing about the gross escapades of a Slob Sim. Paranoid Sims can overreact to being asked to support a local political campaign. Oblivious Sims may not be able to resist the obvious scam. There are lots of possibilities!

New translations are always welcome! Be warned, it's a lot of strings.

This mod only requires the base game of The Sims 4, but some calls rely on traits only seen in certain packs or my other mods. To see the full features of the mod, you will need the City Living, Get Famous, Outdoor Retreat, Parenthood, Vampires, and Strangerville packs, as well as my New Emotional Traits mod.

Mods which add phone calls and texts to the game have been known to conflict with Scumbumbo's Unlisted Phone Numbers mod, so please consider that before installing both.

Extract the files from the zip archive and add them to your Documents\Electronic Arts\The Sims 4\Mods folder or a subfolder in that directory. Since this involves a script file, these files should only be placed one subfolder deep.

Do you think you make NPCs asking for romantic advice more frequent or detailed? I honestly love the feature but I wish the sims would give more updates and details! haha.

Hi! I'm assuming this is a issue from this mod, because it's the only texts and calls mod I have and I don't think you can a text like this in the vanilla game, but one of my sims got an "What if we went on a date? Haha just kidding. Unless?" text from his cousin.
Thank you anyway if it's not an issue from here.

Sounds very awkward. I will look into that issue immediately. Thanks for the report.

I was wondering if there is any possibility that you consider adding Sims calling to invite you to their homes or random events, that would be wonderful :)

Wrong number calls. Prank calls. Scam calls. Solicitation calls (from a list you accidentally agreed to be on so long ago you can't remember).

Makes it fun. Or at least more lifelike.

Thank you very much for making this!

Has anyone tried this with "Phone Call Overhaul" from Lotharihoe?

Or do you know if they would be compatible to be used together?

I have both and they work. The former modifies game resources; this one adds new ones.

Please keep adding to this mod - it's really brought a lot of life to the game. Mods like this really are needed. Here's hoping you can do more event and dialogue mods.

Hi! Great work! I would love to help you with Polish translation! How to contact with you?

Hi there, and thank you! The best way to get in touch with me to share translations is on my friend ISY's Discord server for mod translators. Here a link to it: https://discord.gg/a3KYdu6c. There's tutorials there for different translation tools, as well, if you need them. If you don't wish to use Discord, you can also upload translation files to a file sharing service like Mediafire and copy the link here. :)

Really enjoying this mod! Definitely add to it and shake up the outcomes so one doesn't simply memorize the choices. Perhaps add some guidance based upon skills or traits at 5+? With some probability tweaks, this would be even better.

hey!!! I translated your mod into German! do you have discord so I can share it with you? ^__^

Hello there, and thank you! For translations, you can contact me through my friend Isy's server for Sims 4 translations: https://discord.gg/YcENt6ZJ

hi! i can translate to portuguese if u want! my discord is bu#6387

Sure, new translations are always welcome!

Hello, Kutto! I came across an issue with Random Texts and Calls since I downloaded it recently.

Whenever I started a new game save with a new Sim or Sim family, my Sim immediately got a call from a random Sim about Baatuu and the Black Spire Outpost.

This had become a problem for me to deal with when I start a new game save with a specific theme such as playing a family in the Decades challenge for example.

Can this be looked into? I'm surprised no one else mentioned this before.

Also.. Thank you for the wonderful mods you shared with us!

That's actually a base game feature. My mod does not add anything to do with Batuu, other than a filter to make sure you never receive a text message from one of the NPCs there. The text message you're getting is scripted by Maxis to occur at the start of every new save file and one time in save files that you haven't played since installing the Batuu pack. It's similar to the text message you get from Vlad about the vampire pack.

I rather have the calls from the Batuu pack blocked. I will look into this and see if I can block those calls. Those are the ONLY calls I don't want. But thank you for replying to the issue about them. :)

Hello ! Is the mod compatible with the update of snowy escape ?

Yes, everything appears to be working fine with the new patch. :)

Hi! Are there other mods this conflicts besides Scumbumbo? I removed that but still haven't seen this mod do anything yet.

Since the phone calls are random, it won't show up immediately. I found that texts and calls tend to come in about once per day, but the odds are higher if your Sims have lots of friends with different traits.

I tried to download the mod, but winrar wouldn't open it. :(

Maybe it was a bad download? Try refreshing the page and downloading the new version. If that still doesn't work, try a different unzip program, like 7zip

Still doesn't work and there isn't a 7 zip program apparently on my PC. It's legit only Winrar  for some reason. I had trouble with Winrar opening a grim reaper mod before, so it may just be the program sucking or something. I'm going to try and find a download for 7 zip.

Okay. So it looks like 7 zip can open programs better than win opener. (Got the program name wrong before. Oof.) I got 7-zip to open the rar though. Thanks for the advice.

Hi! Here is my Russian translation of your mod. https://drive.google.com/file/d/1luQLTf3qCKwNnTAW_QMscHp-OoFls-Ag/view?usp=shari... Thank you for a wonderful and interesting mod!

Thank you, I have now added these into the mod! :) 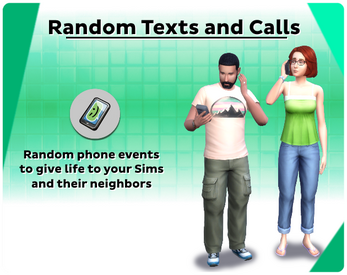