This trait pack adds a set of nine new emotional traits which fill out the roster with traits associated with moods like Embarrassed and extreme versions of the old traits with some drawbacks. All of them are available for children and older, and add boosts to Character Values from Parenthood.

Traits Included in This Pack

Occasionally boosts the Fine emotion, removing much of the risk and reward of changing emotions.

Occasionally boosts the Embarrassed emotion, and causes stress around new people and when doing public performances. Making friends can be difficult but very rewarding for these Sims!

Insecure Sims get a bonus to pet relationships and the Comedy skill, but get a penalty to Charisma and other social skills.

Occasionally boosts the Dazed emotion. These Sims will have trouble gaining skills.

Occasionally boosts the Bored emotion. These Sims require more fun than others, but they can be the life of the party if they're having a good time.

Extreme version of Calm, these Sims have a powerful, permanent bonus to the Fine mood. If something terrible happens and causes them to experience a negative emotion, it may take some time for them to re-calibrate.

Extreme version of Self-Assured, very Confident but may rub other Sims the wrong way. These Sims also get a small bonus for the Debate skill, and for the Business, Politics, and Criminal careers.

Extreme version of Creative, these Sims get very Inspired but may have trouble concentrating. Once they’ve organized their mind, they have powerful boosts to Creative skills.

Extreme version of Cheerful, they tend to be very Happy, but can creep out most other Sims.

Extreme version of Genius, very Focused but have a one-track mind. If you strike while the iron is hot, they can earn powerful boosts to Mental skills. If you take too much time and they forget their idea, expect frustration and stress! Eggheaded Sims also enjoy a small bonus to the Debate skill.

This mod only requires the base game of The Sims 4, but many of the traits will have more features when additional packs are installed.

Flerb for helping me learn how to edit code in S4S

Add the NewEmotionalTraits package file to your Documents\Electronic Arts\The Sims 4\Mods folder or a subfolder in that directory. Then add as many of the trait package files as you desire to the same folder.

If you do not have the Get Famous expansion, download and install the "No Get Famous" version. Install one version at at time!

Is it alright to delete the package file for a trait if we don't want it? I don't think that I want the egghead and insecure trait, but I do like the other ones.

Yes, that's fine. They're meant to be "pick-and-choose".

Oh. Okay then. That's cool. One last question about the package files. Why is newemotional trait. package a file? I downloaded other traits before and I just downloaded the trait file itself for like mental disorders. I'm guessing it's to help the other traits out, which is fine. I guess that I'm just curious since it's a different method from the previous traits that I've downloaded beforehand.

NewEmotionalTraits.package contains some assets that are shared between several traits in the pack, and helps everything work together, yeah. Having a "main" file like that helped me separate out the others so you can pick and choose the traits you want, instead of being forced to a merged package file or miss out on certain features/bug fixes. For my other trait packs, this sort of file is a ts4script, but due to how the game handles certain things in code, I needed to use a package file for this set.

That's pretty cool. I'm glad that you chose to make the mod like that since I don't want to make my sims feel embarrassed/bad, but I'm okay with them feeling dazed and stuff. I think that it's actually a pretty cool idea to go and make extreme versions of BG traits. They probably won't break as easily due to having backbone coding beforehand, and it's just a nice touch overall. Thanks for making the traits. :)

do these work with the new patch update?

Everything appears to be working.

Both trait mods dont appear in game. they load up when i check my script mods, but in cas, they are not there

Did you install the package files as well? Try deleting the file called Resource.cfg in your main Mods folder, too. The game will generate a new one once you load.

Are you unzipping the mod?

when download, its a rar, but my rar opener keeps saying theres an error when i try to unpackage it or even convert it to a zip.

What program are you using to open the rar? Have you tried a fresh download?

Thank you for the mods! Just wanted to make a suggestion: could you consider renaming your files to remove the spaces and brackets around your name? Mods named like that need to be renamed when the game loads them, which makes loading times longer. Normally I just rename them myself but a few of your mods include script files, so I'm wary of renaming those.

This issue with special characters is specific to Macs, right? I have heard about this a while ago, but I'm pretty unfamiliar with those systems. Renaming all my files now would take a lot of reorganization effort on my end and introduce a huge risk of people installing duplicate mods when they update my stuff, so I won't be doing that, sorry. There are tools available that will remove special characters from the filenames in mass, such as File Renamer (https://www.filerenamer.com/). And to reassure you, my script files are perfectly safe to rename. I often go through a few names while I test before releasing.

hi i tried downloading this but i didnt get a zip file :( and it didnt appear in game

I downloaded these traits, and whenever I try to play I always get a message that says The game failed to load, with an error code, and a last exception file in my Sims 4 folder. I attached a picture below, and I already checked to make sure it wasn't any of my other mods or CC. It also gives a white outline to the hair on one of my sims which is CC. I don't know if I its something I did wrong when installing it into the game because I can see all the traits in CAS mode. Does this mod conflict with any other mods.

Error 140:645fba83 comes from broken event/party mods, especially ones from BPS like the Baby Shower mod or Funeral mod. Weird streaks in CC hair is usually caused by running the game in laptop mode. My mods shouldn't be capable of causing either issue here. If you are getting this issue with only my mods installed and nothing else, then please upload the LastException file and I will take a look.

Thank you I tried it again with just you using just your mod, instead of running the game with my other mods to see if I got the error, and then adding you mod, and found out that I don't see the error with just your mod in it. Thank you for the help.

Sorry to be a pain, but I downloaded these traits and they are not appearing in my game. I thought there may be a clash with other mods - I removed all my mods folder and custom content and still the traits wouldn't appear in my game. Not sure if it is something wrong I am doing

How have you installed it? What folder did you put it in? Have you unzipped it?

Thank you, sorry about being thick, I didn't unzip it (or thought I had to unzip it as it didn't have a file/ folder icon in my downloads) Sorry about wasting your time. :) 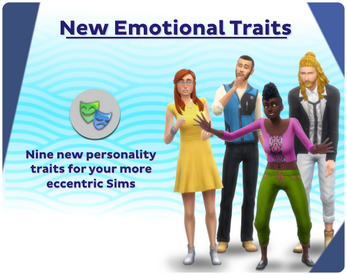 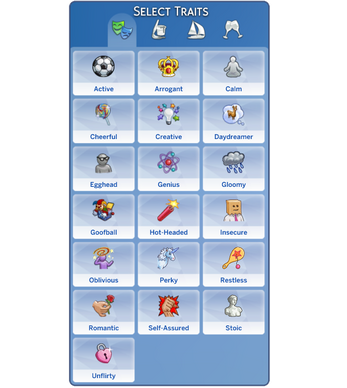 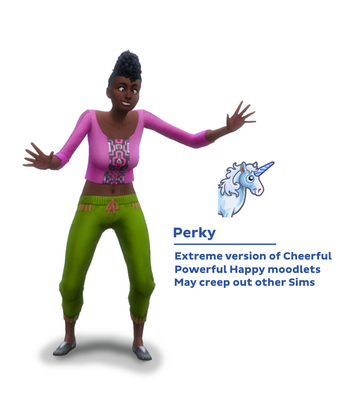 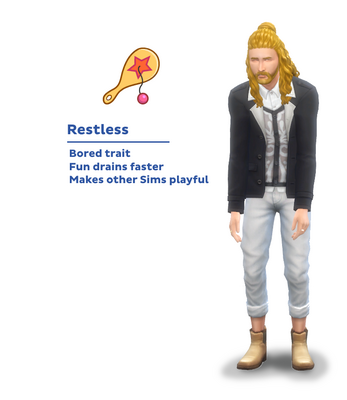 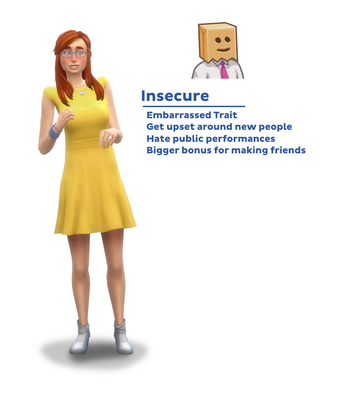 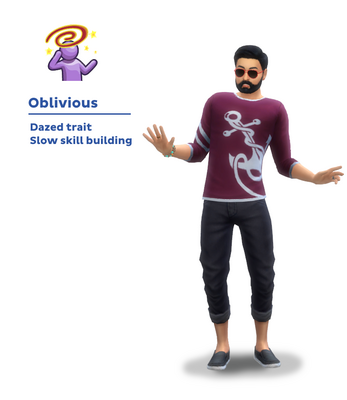