Added a new "Share War Stories" friendly social interaction for Sims with the Veteran trait. It will slightly reduce the length of Sad moodlets and add a small amount of fame.

Pregnant Sims can no longer enlist as this was causing problems with the outcome of the rabbithole interaction.

This mod adds a new self-interaction to Sims to allow them to enlist in a war. This mod was designed with the Decades Challenge in mind to simplify the process of sending Sims to war during certain time periods, and avoid using cowplants or debug cheats to do the deed.  Even if you aren't playing the challenge rules, this mod can also be used for storytelling and roleplay purposes.

To use this feature, click the active Sim (young adult or older) navigate to the "Actions..." menu, where you will find an option to "Register for the Draft". A 24 hour moodlet will be added to your Sim with a countdown for when they have to ship out. You can choose this option again while the countdown is active to leave immediately. Once the countdown is up, they will leave the lot for several hours and the game will decide their fate. 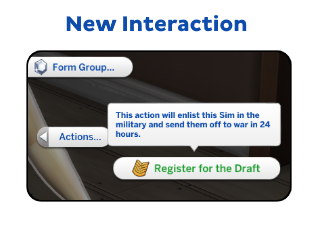 Sims have a 50% chance to live or die. Sims who survive will be given the Veteran trait, which gives them a $600 weekly pension but may also cause negative moodlets randomly.  Sims who die will keel over in front of the active house, so you do have an opportunity to plead with the Reaper or let Spellcaster familiars to save them. Sims who are spared in this way will still be given the Veteran trait. 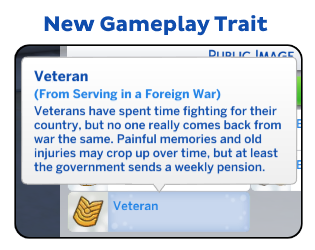 If you switch to another lot while Sims are away at war, it will cancel the interaction and you will need to start the process over.

French (thanks, Maïa Game and Candyman!)

This mod uses completely new tunings and script, so it should not cause conflicts with any other mod.

Only the base game is required to use the mod.

Is there any way that your sims can return to war?

Not really.  This is based on the rules of the Decades Challenge where a Sim is only ever intended to go to war once, but if you wanted to go through the process again you could probably use cheats to remove the Veteran trait.

Any chance you'll add the 'Share war stories' chat option that's in Vanilla *if* you survive the war? Would add to the RP and realism haha.

Cheers! I translated this mod into Latin Spanish, it is only the string in Spanish, so you must download the complete mod to work.

Thank you for the translation, I've added it to the mod now.

This would be cool to pair with a Going Away party, a formal or informal way of sending Sims away to serve.

Hello to you, I just downloaded your mods and I just translated it into French. How can I send you my translation.

Hello, and thank you! You can send me the string table or package on Discord or upload it to a file sharing service and send me the link here or on ModTheSims. I'll be sure to add your name to the credits.

Thank you for your help so far! I'm sorry to bother you, but it looks like some of the strings are missing from the French tables. Do you mind taking another look?

Hello to you, no problem I'll look at it Monday afternoon.

I think I understand the problem now, and it is my fault. A few of the later strings were not copied over from English into the other languages. Sorry about causing you trouble. The update I just uploaded now has consolidated all of the strings into a single table for each language and I made sure that every set was the same. Would you mind taking another look now? 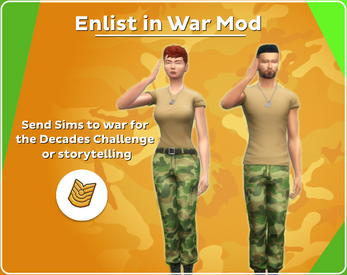