A mod for another mod! Mod-ception! I'm a big fan of Basemental's work and wanted to make my own addition to it. These little extras allow you to interact with the main Drugs mod in new ways.

Want to add some "extra flavor" to the run-down bar in your game or the lots next to it? Want an easy way to find drug dealers without relying on random chance or cheesing it with CAS? Just want Sims doing the goofy walkstyle fumbling around your lot? Then the Sketchy lot trait is perfect for you! 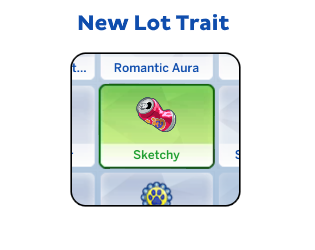 Add the Sketchy lot trait to any lot, residential or commercial. Drug dealers and drunk Sims will start showing up in the evening and will continue throughout the night into the wee hours of the morning. Drug dealers will act like normal patrons on commercial lots, and will hang around local parks near residential lots. Existing drug dealers will be summoned first, but if they are unavailable or if one does not exist, the game will generate some for you. On commercial lots, drunks will bumble around trying to buy more booze or coffee. On residential lots, most drunks will walk by like normal pedestrians but some may choose to loiter. 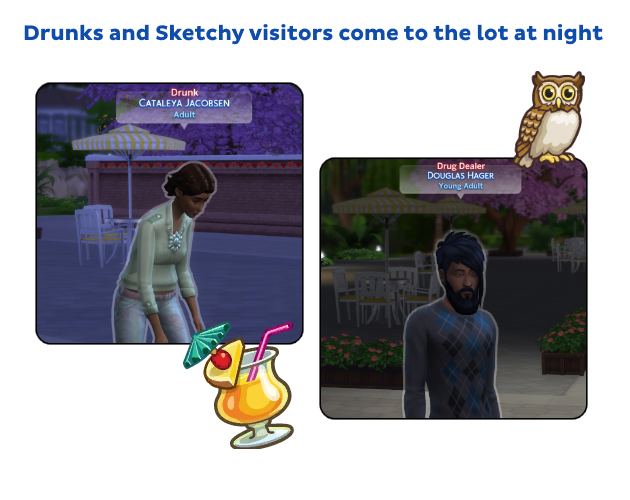 Based on a suggestion from zapcracklepop, this mod turns the Celebuserum celebrity perk into "Special Deliveries" which can mail random pills, powders, and goodie bags to your Sims. Within a day of picking up the perk, a drug dealer will reach out to your Sim (teen or older only) by phone and offer to toggle the perk to deliver drugs instead of Celebuserums. You can also talk to any drug dealer NPC to toggle it or use an option on your phone at any time. It costs §1000 to start the service, and you may be asked to pay upkeep of §300 every week or so. You can toggle the service off at any time and return to Celebuserums for free. 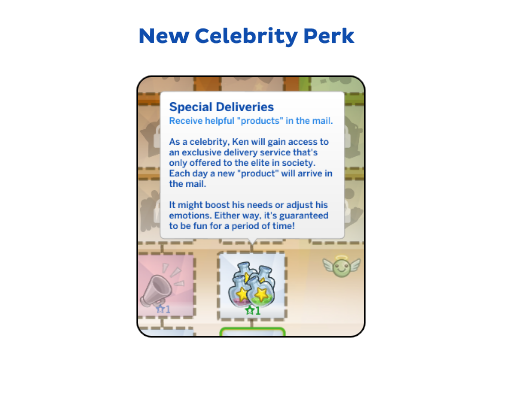 Is your Sim looking for a quick drink without going to the lounge, but doesn't own a full bar counter? Fret no longer! This mod adds cans of beer straight to your fridge's Quick Meal menu for easy and instant access to booze. This is completely compatible with Srsly's Complete Cooking Overhaul mod. 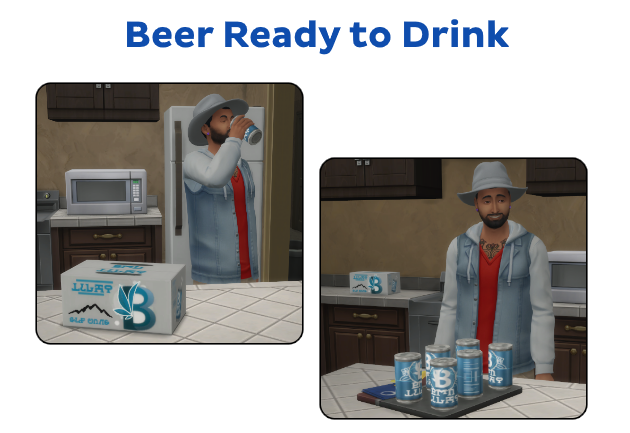 For users of LittleMsSam's Improved Spa Day Tablet mod, cans of beer will be added to the Liquor menu of that mod. If Discover University is installed, the different beers from the keg will also be added to the menu.

This mod adds the "Inebriate" spell to the Mischief school of magic. Spellcasters can use this spell on themselves or other Sims to immediately have them feel the effects of a full drink. If the Spellcaster is in a charged state, the effect is roughly doubled. Effects will stack if you cast this spell on the same Sim multiple times. Cast responsibly!

This mod requires the Spellbook Injector mod by r3m in order to show up in game.

Have you ever seen a Sim hanging out downtown that you just feel should be a dealer? Have you ever wanted to assign a particular Sim, but didn't want to scroll through the list to find their name? Now any Sim you can see on the lot can be turned into an NPC Dealer with just a click.

While Debug Cheats are enabled, shift-clicking any valid Sim now gives you the option to make them into a Dealer instantly. The same rules for who is a valid target still apply, so it only works on Sims who are old enough, are unplayed, are not gang members or straight edge, etc. You'll be notified by a message when it goes through successfully. Dealers can still be assigned and removed through the normal methods. 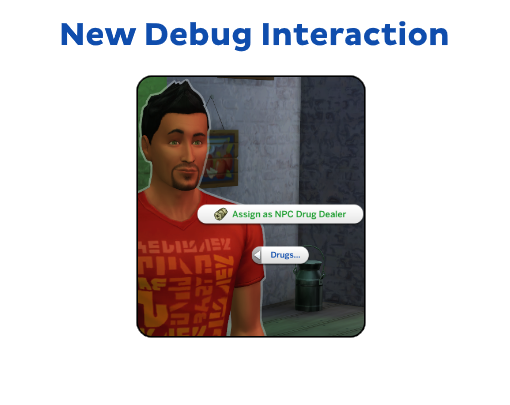 Hi! Would this mod work with just Basemental Alcohol or is it only with the full Basemental Mod?

I don't play with Basemental Alcohol so I can't guarantee anything will work exactly as it is supposed to. Some things explicitly won't work or do anything as they require resources from Drugs, but Beer in Fridges and Inebriate Spell might be compatible.

Anyone know a mod that adds a compact mirror to use the powders on the go, or that adds pipes to smoke the non-weed substances?

I cannot find beer in "quick meal" menu in the fridge.

Hi there! Come by the Discord server and I or one of my friends will be able to help you troubleshoot the issue.

assign as npc dealer isn't working for me

Which part isn't working exactly?  Come on onto the Discord server and I or one of my friends can help you troubleshoot.

This is amazing, especially the beer!

Here is the update of the Russian translation   https://www.simfileshare.net/download/2384730/

Thanks as always for the translation!

There was one table missing for the new beer items, so I filled in the last couple strings for "Light Beer" and "Case of Beer" with DeepL. If those are botched, please don't hesitate to correct me.

This still works great, but one thing I'm noticing, even though I think it might be another mod causing it, when I put the trait on a residential lot, the drunks & dealers enter the house.  Maybe there's a setting I'm missing?  Still love the traits though.

What world are you playing in, and do you have any other lot traits? This isn't happening in my game.

Does this work with the most recent version of Basemental Mod, there have been a lot of tweaks to the mod lately. Thanks.

Yep, everything is still compatible.

hello please help. The sketchy trait is not showing up in my game

Have you re-enabled mods after this latest patch? How do you have the file installed?

How do you have the file installed? Did you unzip it? What folder is it in?

Yes, all parts of the mod are still working, I just haven't updated the page recently as it hasn't need a fix.

Hello! I made a Russian translation of your mod http://www.simfileshare.net/download/1671962/

Thank you very much!

Send me the new version and I will add it in. :)

thanks for the update I shall download it tomorrow morning 😊

Hello! I traslate this mod to latin spanish, it´s just strings in spanish, the mod must be downloaded for the translation to work.

Thank you for the translations, I've added them both to the mod now.

Cannot download, keep getting error that it is "unknown or damaged"

It's working fine from my end, but download errors like that are usually browser based. Have you tried hard refreshing the page or using a different browser?

this mod sounds awesome will you be adding anything else to it in the near future? 😊

Depends on what Basemental adds to the main mod, and what kind of ideas I get along with what my coding ability enables me to make. Glad you like what I've put up so far! :) 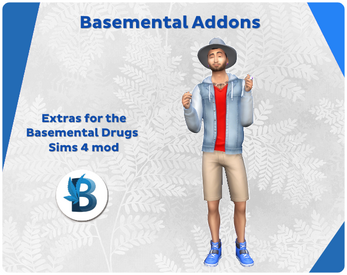